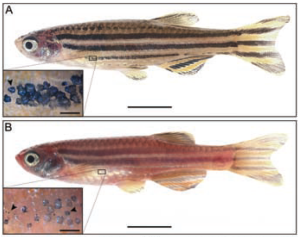 (A) Lateral view of adult wild-type and( B) golden zebrafish

The genetic basis of variation in human skin color across global populations is still largely a mystery. Although partially delineated for Europeans, skin color remains poorly understood for East Asians.

The dark skin of African populations, the ancestral state in humans, is protective in regions with high solar UV exposure.  In contrast, the light skin of Europeans has a selective advantage in northerly latitudes due to higher sun-dependent generation of vitamin D. European skin is associated with a large increase in susceptibility to skin cancer.  This includes a 10- to 20-fold increased risk of melanoma, compared to the low incidence of this deadliest form of skin cancer in people of African ancestry. Susceptibility is related specifically to lesser melanin pigmentation, because skin cancer susceptibility is even more severe in human albinos of any group.  Surprisingly, East Asians and Amerindians appear to show no significant increase in melanoma despite their relatively light skin. A molecular understanding of this disparity can only be gained after the alleles involved in skin lightening for both groups are identified.

From functional admixture studies, SLC24A5A111T and SLC45A2L374F have each been estimated to contribute about 1/3 of the difference between West African and European skin color.  East Asians largely lack these mutations.  Contributors to European skin, hair or eye color (ASIP, TYR, SLC24A4, KITLG, OCA2 and MC1R) are not substantial enough among East Asians to be a primary contributor to East Asian skin color.

It is reasonable to hypothesize that there exists an East Asian equivalent of SLC24A5A111T.